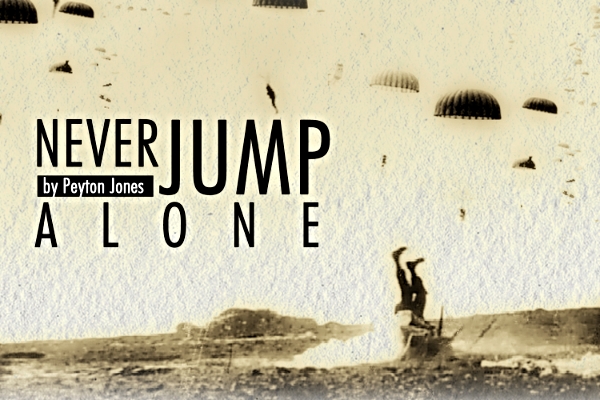 The most frequent question I’m asked is “how do I start?”

When you get ready to take the plunge, and dive into church planting, there are a few rules. Number one, you need to build your team. Being hasty and dropping out the hatch without this in place is tantamount to dropping without performing your safety checks.

Out of impatience and supposed “faith” in the power of God to do anything, you might be tempted to jump alone from the pinnacle of the temple and see if the angels will hold you up. The problem is that’s not faith…it’s stupid…and it’s church planting suicide played to the tune of rock-and-roll bravado.

Last year I watched a documentary on illegal base jumping and found that the few guys brave enough to jump off of cliffs and skyscrapers with flying suits always feel compelled to have a jumping partner. Think about that. These guys have more balls than the pit at Chucky Cheese yet they still want a partner with them at all times.

If nothing else, it might just be to have somebody to scrape them off the ground if the jump goes wrong. When I first founded New Breed, I realized that there were other jumpers ready to strap on the parachute, but like me, they just didn’t want to do it alone. Therefore New Breed began to form up networks of church planting, with the first two churches serving as sending agencies, so that the other guys coming up behind us would never have to jump alone.

When you’re a year into your church plant, on the “No Man’s Land” side of the front line, knee deep in mud, guts, and fear, you’ll be eternally grateful that you’ve got a band of brothers who can stand next to you and shoulder the burden of leading the troops. That’s right soldier, you need a team. The team you serve with is your platoon of like minded commandos who are willing to jump on the grenade in your foxhole. They’re not just your team mates, they’re your brothers in arms, and sometimes they pull you out of the soup, throw you on their back, and carry your bullet riddled body to the safety of an airlift.

When New Breed co-founder Dai Hankey planted in a rough Welsh council estate, there were a number of Monday mornings that I peeled him off the ground with a phone call and when I was low he returned the favor. He helped me to stay in Wales as I fought my transition from Californian reptile (where there is 6 days of rain a year) to Welsh amphibian (where there is 6 days of sun a year). I can’t even tell you how much of an encouragement we were to each other during those initial years through turning up at each other’s churches and making phone calls. It just helped to know that there was some other nut out there who considered me normal. I’ve come to the conclusion that there is something about tying two foxes together by the tail and having them carry a torch through the harvest fields that sets Philistine country ablaze! Nonetheless, be it Paul, or any of the church planters, they never go it alone. To do so is unwise, unsafe and discouraging.

Some guys go at church planting haphazardly…almost recklessly, resembling Daffy Duck drinking the potion in the devil costume on the Vaudeville stage. “I can only do this trick once” they shout, and spontaneously combust into flames, leaving a black residue on the floor. Finding the right team is essential to preventing you from the church planters crash-and-burn.

Many planters get the great commission like the disciples in Matthew 28 but struggle with the “tarry in Jerusalem” part of Acts 1. Slow down turbo. You’ll get your shot, but first we gotta build your squad.

Reflecting on planting the Corinthian church, Paul said that he “laid a foundation like a wise and master builder” (1 Cor 3:10). Compared to our padawan efforts at planting, Paul was a Jedi master at it. Paul used a team approach that wasn’t too much unlike the building of modern houses. When building a house, you need a team of plumbers, electricians, foundation layers, carpenters, and otherwise. God left behind a five-fold aspect to ministry wherein a pastor supplies what an evangelist is lacking and an “apostle” (little ‘a’) does what a pastor can’t do. There is a pattern in the New Testament of traveling in teams of apostles, prophets, evangelists, shepherds and teachers. Guys who can complement your weaknesses. One guy leading isn’t enough. Jesus sent them two by two.

Paul knew he should never walk alone because his Master’s method was to send them in teams of two, propelling the disciples out into the towns of Judea in dynamic duos like double-barreled shotgun blasts. Did you notice the breakdown of the teams in Luke 10? There were 36 teams of two. Similarly, check out Barnabas’s Method of Operations. In Acts 11:25 when Barnabas is sent by the twelve to go and check out what’s happening up in Antioch, the first thing he decides to do is find a partner. That’s going to be step one for you too. Barnabas too took lessons from the Master, tagged his bags for Tarsus, and booked a passage to recruit a once legendary figure named Saul, who after 11 years had faded into obscurity. Therefore, recruiting your team is the first step to laying a foundation if you’re going to do it like a wise and master builder.

Paul’s 1st century Church planting network enabled multiple teams to strategically hit numerous targets throughout a broader area, operating in a bartering system of interchangeable men with interchangeable gifts who travel to an area when needed. Paul’s network was Asia Minor, and he moved his carpenters, plumbers, and electricians all around this little piece of Turkish real estate as and when needed.

Job 31 Ministries wants to thank Peyton for his support to our ministry. Peyton Jones is the co-host of the, editor of Church Planting Magazine, author of Church Zero regarding Apostolic church planting, and he’s also a church planter with New Breed. If you’d like more  information about Jump School and church planting, or about Peyton’s podcast,  go to his site ChurchPlanterMagazien.com

Job 31 is excited to have Patrick as the Church Planting and Mission editor. Patrick is the Founder and President of Living Bread Ministries. Living Bread is the catalyst for a comprehensive church planting movement among the global poor. Learn more at their website www.livingbread.org.

If you have any questions, please contact Patrick at cpmeditor(at)j31.org.